Refutation of justifying abortion because of zygote mortality, historic infanticide, and more 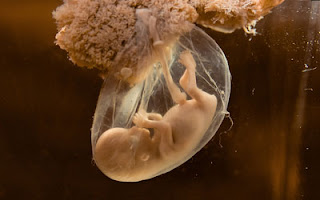 Often, arguments for abortion avoid the ultimate question: is that which is in the womb a human life? This article clearly concedes it is, stating that even zygotes "are human, by any usual definition of the term." The argument in this article is not whether the enwombed are "human." Instead, their level of sacredness is called into question. Let's look at the various arguments in the article, starting with this matter of zygotes.

THE MAIN ARGUMENT: ZYGOTE SURVIVAL RATES
The article says “most human zygotes throughout history never became children” because they were either “miscarried,” had “chromosomal abnormalities” that proved fatal to the zygote, or that “genetic and environmental conditions rendered the zygote non-viable.” The article then concludes of these zygotes:


They are human, by any usual definition of the term, but they cannot survive. This happens to most zygotes that have ever been conceived. This fact leaves me, a biologist, wholly unconvinced by arguments about the sanctity of life.

Before we parse this conclusion, let’s again pause on the point of agreement. Fertilized zygotes “are human.” The article is correct in this regard. From the moment of conception, the nascent life has its own unique DNA, and is the empirical beginning of human life that progresses unto death. Now, let's analyze this main premise.
Ultimately, it's nonsensical to assert life isn't sacred regardless of the frequency of biological malformations. It would not matter if 99% of zygotes didn't survive. No statistical appeals are necessary once we recognize human life is sacred and human life begins at conception.

Keep that in mind when reading these next three bullets, which are not foundational rebuttals to the article's zygote argument. Remember, the statistics are inconsequential to sacredness of life. Where there is human life, the sanctity proper to human life is present. The following thoughts are rather an inspection of zygote mortality statistics.
INFANTICIDE
Another phenomenon to which the article appeals to justify abortion is the reality of historical infanticide. Granted, it does not endorse infanticide, at least not for modern cultures. The article states of America: "Society-wide, we have agreed on this much: once they are born, let us not kill our children."

That much is a relief (even though proponents of post-birth infanticide exist in the West, such as the notorious atheist professor Peter Singer). However, the article still appears to use the reality of historical infanticide as justification of abortion as a necessary evil:


There is a long list of behaviors and actions historically available to women who are trying to control their own reproductive lives. Infanticide is on that list. I am not arguing that this is good, but it is true. ... Evolution responds to circumstance. Most zygotes disappear before even making themselves known to their mothers. In many cultures, in which the environment was variable enough that many children were unlikely to make it to adulthood, infanticide has been acceptable. ... Indian and African slave populations in Surinam [used abortifacients] so that they would not bring children into a life of slavery.

And, in the opening paragraph of the article:


Sometimes, though, in the service of the greater good, abortions are necessary.

You see in these related excerpts several ideas. Let's examine them:

One must carefully read this section of the article to grasp exactly why historic infanticide is cited, ultimately, as justification for abortion. Although the article claims it is not arguing that infanticide is "good," it says it has at times in history "been acceptable." This ties into the opening claim that "in the service of the greater good, abortions are necessary." Essentially, this all amounts to arguing that, although abortion is not "good," it is something "necessary" to prevent something bad in the judgement of the mother. The "bad thing" ranges anywhere from the mother's judgement of saving a baby from growing up in slavery to the baby being an obstacle to the mother's career.
This brings us to a segue. Earlier in the article, we see reference to the career factor:


One of my friends escaped an abusive home, became addicted to heroin, and got pregnant very young, before aborting the fetus, getting her act together, and becoming a scientist. That part where she got her act together and became a scientist? Far less likely had she been a teenage mother.

To the devout pro-lifer, this is an atrocious razing of the ears and heart. One could imagine a paraphrase of the conclusion: "That part where the baby grew up to be a scientist? Far less likely since she was killed in utero." But, more to the point, the mother's potential future career is an irrelevant factor when determining the sacredness of the enwombed baby. It is not sensible to justify the killing of one's children on the grounds that one might enjoy a successful career without them. And, a baby is not more or less sacred if her mother eventually becomes a scientist, a seamstress, a homemaker, or whatever. We don't need to wait to find out what the mother's career aspirations are before we can determine if life in the womb is expendable. The life of the enwombed is sacred on its own merit. The mother's career is a diversion.

Scapegoating evolution
Let's return to "evolution." You see how evolution is cited as a scapegoat both for the unwilled death of zygotes and willed infanticide. This is not the first time we've seen evolution speciously cited as some unimpugnably good force to justify something outside its purview (Atheist evolutionary biologist professor Gad Saad erroneously argued that "morality" was strictly a "scientific" phenomenon of evolution). But the problem with such appeals to evolution is at least twofold.

Line
The article then argues against the notion of a distinct “line” at which sacrosanct life begins. I emphasize sacrosanct because the article has conceded earlier that the fertilized egg is already a “human” life. This section of the article is really a thought exercise about what are acceptable stages of development it’s still okay to terminate that human life. The two most “obvious” lines, conception and birth, are both rejected.
Continuum
So, if conception and birth are both inadequate "lines" to determine sanctity of life, when is it supposedly no longer okay to end a human life because it became too sacred? The article tosses out more than one suggestion.

One of the article's suggestions is that abortion could be considered acceptable up to the stage when the baby would survive outside of the womb. The viability argument has been refuted in prior articles: e.g. Notre Dame professor's flawed argument for abortion).

The article also posits the average age at which organs are laid down or when "brain development accelerates in utero" as a possible threshold to no longer allow for abortion.
The article does not actually define any of these considerations as the exact threshold of sanctity of life. Rather, it is ultimately arguing for a nebulous "continuum" for abortion instead of a definite line. From there, the article suggests the following unspecific solution:


If we recognize a trade-off between the positive social impact of keeping abortion available to women, and the problems of providing carte blanche for all abortions up to some very late date, perhaps we should seek a solution that renders barriers to abortion higher the farther along in the pregnancy a woman is, but allows free and easy access early in pregnancy, and so does not sacrifice a woman’s ability to choose her life’s fate.

Many readers were probably already aghast at the phrase "positive social impact of keeping abortion available."

The article segues here to call anyone who is pro-life and believes the possibility of the death penalty a hypocrite. This is a common claim by abortion supporters and has been rebutted in numerous places (eg. CatholicVote, Jimmy Akin).

BROKEN LEG ANALOGY
The article then attempts to justify abortion by claiming it is morally analogous to fixing a broken leg:


Furthermore, if you play soccer and break a leg doing so, it is not responsible to remain maimed simply because the playing of soccer brought with it the risk of breaking one’s leg. It is, in fact, responsible to have your leg fixed, not merely so that you can live to play soccer again, but so that you can go on to contribute maximally to society, living up to your potential, not just with regard to soccer, but in other regards as well. If you have sex and end up pregnant, it is not responsible to become a parent out of a sense of moral obligation, if you are not ready to do so. Responsible athletic and sexual behavior both involve a reduction, on the front-end, of the chances of undesirable outcomes. Setting a bone is not identical to aborting a fetus, but there is a moral analogy to be made, with regard to how a person should take responsibility for their actions.

There is actually no moral analogy to be made here.
AN UNCONVINCING ATTEMPT TO CALL ABORTION "HUMANE"
The final section of the article is called "A humane and reasoned response." But, this argument for abortion is neither.


There is a question of which of two lives we, as a society, prefer. Do we prefer the life of an adult who can make decisions for herself, and who has found herself in an unfortunate position? Or do we prefer the life of her unborn child—a child who has not yet had the opportunity to make decisions for itself, good or bad? ... The implicit moralizing that prefers the fetus to the woman has judged the woman guilty for needing an abortion in the first place.

This is a glaring fallacy of false dichotomy.
Finally, let's look at one more excerpt from the article:


By preferring the future baby—who will need love and sacrifice, and lots of it—over the adult—who does not need that kind of support—you guarantee that our shared social fabric will be stretched ever thinner.

Consider the following reactions to this quote:

FINAL THOUGHTS
The modern abortion movement is the bloody scandal of our time. All this brings us to an even clearer understanding of the evil of abortion. Neither evolutionary, nor biological, nor career-based arguments for abortion can withstand scrutiny. Each collapses under their own fallacies and self-contradictions. Proponents of life from conception until death should stand strong in these dark times, by being informed, praying and fasting, and continuing to contribute time and resources on behalf of the enwombed innocents, marriage, and stable families.


1In extreme cases where pregnancy threatens the life of the mother, see discussion of incident at Phoenix hospital in 2010—refer to paragraph beginning with "Brown's book is fraught with footnotes..."
Posted by The Catholic Voyager at 7:54 PM No comments: