Praying to Saints: A Visual Aid

Suppose you are a non-Catholic Christian and you have trouble with the Catholic (or Orthodox or some other church) teaching that Catholics "pray to angels or saints." You may say there is only one mediator between God and men, and that's Jesus. Or you may say prayer is due to God alone. Or perhaps you are a Catholic who has been confronted with these responses to the concept of prayer to saints. So let's take a brief look with a visual aid.

When a Catholic says he is "praying" to an angel or saint he is using the term prayer in the sense "to ask." It means to petition someone for something. The Catechism of the Catholic Church (CCC) words it simply to "ask them to intercede."


CCC#2683 When they entered into the joy of their Master, they were "put in charge of many things." (cf. Mt 25:21) Their intercession is their most exalted service to God's plan. We can and should ask them to intercede for us and for the whole world.

This example is seen in Scripture many times when someone asks an angel or another member of the Body of Christ for intercession.

So the principle is set forth in Scripture: We can ask for the intercession of another member of the Body of Christ without violating the singular mediation of Jesus Christ, nor granting the saint the worship due to God alone. The principle finds no qualification in Scripture that asking members of the Body of Christ in heaven is off-limits. In fact, Scripture tells us the prayer of a righteous person is most powerful (Jm 5:16). All the more should we then want the intercession of those fully united with Christ!

Graphically, praying to saints (or angels) looks like this: 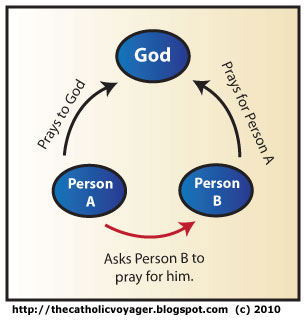 Therefore, intercessory prayer neither violates the unique salvific mediation of Jesus Christ, nor applies worship to a creature.

Another concern that may come to mind is "How can the dead hear us?" Doesn't Scripture say the dead "know nothing"? (Ecc 9:5)

First, we see in Scripture a number of examples of the conscious awareness of angels or those who have undergone physical death.
So what does the "dead know nothing" mean in Ecclesiastes? The very book can be confusing and one should not jump to form doctrine from contextless verses therein. The book itself opens with most non-doctrinal words: "All is vanity!" Ecclesiastes 9:5, which says the dead know nothing, also says there is no memory of them, which of course could be disproved simply by remembering someone dead. In verse 7, the speaker says "Go, eat your bread with enjoyment, and drink your wine with a merry heart..." This concept is one Paul actually condemns when writing to the Corinthians: "If the dead are not raised, let us eat and drink, for tomorrow we die" (1 Cor 15:12). But of course the dead are raised as Paul argues, which suggests the writer of Ecclesiastes could only be correct (if he was ever correct) if there was no Resurrection.

Furthermore, the speaker in Ecclesiastes goes on to say that these "dead" are going to "Sheol" (Eccl 9:10). This is commonly held to be the "abode of the dead" (Strong's Concordance #H7585 , CCC#633, etc...) where Jesus visited and preached to "the spirits in prison" (1 Pt 3:19). If one wishes to consider the dead in Ecclesiastes to have been in this "abode of the dead" or whether he wishes to consider Sheol by it's only other definition of "hell," neither applies to the heavenly members of the Body of Christ in the New Covenant. Therefore, one cannot use Ecclesiastes to say the heavenly members of the Body of Christ "know nothing."

Finally, let's say one were to jettison all of the above and still insist he is not comfortable asking anything from anyone in heaven except for God. A solution for such a person would be to ask God to pass on his request for intercessory prayer. For example one could say: "Dear God, please ask Elijah to pray for my illness." In doing so, one addresses only God, yet still follows Paul's example of prompting other members of the Body of Christ to pray for him!

EDIT: September 6, 2010
Supporting the idea that Ecclesiastes 9:5 refers to those in Sheol is:

Psalm 6:5 For in death there is no remembrance of thee; in Sheol who can give thee praise.

Posted by The Catholic Voyager at 4:13 PM