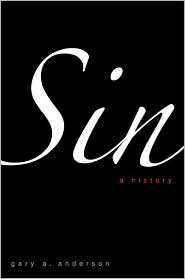 Sin: A History (2009) by Dr. Gary A. Anderson is an excellent treatment on the historical imagery characterizing the idea of sin. I give it 9 out of 10 stars.

Anderson takes us through the idea of sin throughout the Judeo-Christian tradition. Going all the way back to the first temple period of the Old Testament, sin was predominantly viewed as a weight or a burden to be borne. Another figure is the idea of a blemish or stain that requires cleaning. But the predominant figure beginning in the second temple period through the Christian era is the figure of debt.

The book is fraught with Biblical references demonstrating the idea of sin as a debt. The heart of the book reviews many of the ancient ideas of debt, slavery, land ownership, etc. that figure into the Jewish idea of due payment for debt. One need only review the several blog entries I have made on typology to know that I appreciate Anderson's treatment of Old Testament figures of debt and repayment as prefigurements of Christ's satisfaction for the debt of mankind's sin. These figures are really the heart of the book, which ends with a study of Christ's atonement.

Anderson not only draws largely from Scripture, but he also draws from ancient rabbinic or Jewish commentaries on the Biblical texts themselves. He is able to derive a number of insights from the Biblical texts by understanding the Jewish context in which they are understood. For instance, by studying the rabbinic interpretation of Psalm 32:1-2, we learn that in Jewish thought, sins and merits were not seen as a hard and fast legal accounting system. Rather, the love and mercy of God is revealed when he removes sins from the scales in order to tilt it in favor of Israel's merits (p. 107),

The third section of the book deals with "balancing debt with virtues." Anderson is alert to cries of "salvation by works" that are often made by those since the Protestant "Reformation" who deny man's capacity to merit. His defense of man's merit is solid and brings the reader's attention to the generosity of God. For instance, he cites Proverbs 19:17 Anyone who gives alms to the poor is lending to the Lord, the story of King Nebuchadnezzar who is exhorted to give alms to atone for his sins, or even the story of Jesus and the rich man who is told to store up "treasure in heaven" by giving alms. Though he does not do so with great length, Anderson does touch on the key to understanding man's merit as God's gifts returned. He uses the classic analogy of the penniless child (p. 160). The parent gives the child a gift of money. The child in turn buys a present for the parent. The present is essentially the parent's gift returned, yet the child is able to participate in the order of love by parting with something received. The parent is, of course, moved by this act even though it was the parent's gift returned. So too is it with merit (e.g. CCC#2008). Those interested in Catholic apologetics will appreciate the Biblical and traditional strength of such discourses in this book. As such I was also impressed that the book won the 2010 Christianity Today Book Award in the Biblical Studies category.

Some readers may find the book a little challenging to follow due to the immensity of references and word study. Anderson, who is professor of Old Testament/Hebrew Bible in the Department of Theology at the University of Notre Dame, also delves frequently into word origins, etymology, and parallel word usages in antiquity. Some of these sections may require the reader's careful attention as he intersperses words he has previously defined into subsequent sentences. I would not classify the book as "light" reading, although readers far more adept than I no doubt will have no stumbles. Readers who enjoy deep treatment of language will certainly appreciate Anderson's thoroughness.

I learned of this book while listening to archived audio of the Kresta in the Afternoon radio show. The episode, which was from December 22, 2010, was a replay of a February 3 interview with Dr. Anderson. The interview was rated as the #26 best of the year by the show's staff, which is not bad considering what I would guess are the 100+ interviews Al Kresta does every year. As a frequent listener of the show, I personally would have rated the interview much higher. The MP3 archive of the interview with Dr. Anderson can be heard here.
Posted by The Catholic Voyager at 4:00 PM