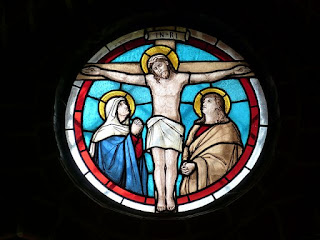 For many Christians, events and circumstances of the world try their resolve and the faith to which they have devoted themselves. In such dark hours, or even dark days or years, a weary child of God may find him or herself wondering how circumstances can burden so long or intensely. They might even be bombarded by others who tell such Christians that they are the cause of their own suffering. Perhaps even another Christian preacher who professes a prosperity gospel tells them their trials are due to some sin or deficiency in their very faith. Perhaps these weary Christians pray for the same things over and over and never see an answer in accord with the petition. They feel a type of emptiness or distance from God. And they ask themselves, does not divine revelation speak of Christians having "hearts that burn within" (Luke 24:32) for Christ? Shouldn't that be always? And does not God say "Ask and you shall receive"? (Matt. 21:22) And so the crosses they bear and the distance they feel from divinity become matters of suffering and can challenge their faith.

As difficult as it sometimes may be, such Christians may consider remembering the totality of divine revelation and the wisdom of the saints.

Consider the Biblical book of Job, perhaps the most famous work in human history regarding the matter of suffering. Job is an icon for a righteous person who suffers in spite of his righteousness. He is a precursor to God incarnate, who humbled Himself and accepted unjust suffering at the hands of His own creatures.

Job is stricken with a variety of physical and financial afflictions and the loss of family. Only after a lengthy period of grief is he renewed, his "losses" recovered multifold (Job 42:10) so to speak, with restored health, family, and treasures. The restoration to this "new life" reminds us of the eternal life anticipated by a Christian that supersedes all previous joys in life. It is the "treasure in heaven" that is the prize on which the Christian sets his eye. (Luke 18:22)

The man Christ, just as many of his suffering Christian followers thereafter, cried out to God to be spared the suffering, bloody "cup" which he endured and to which he was headed. (Matt. 26:39) Yet it seems this petition was not answered in accord with how it was stated. From that point, Christ remained in suffering, and was scourged and crucified, the ultimate innocent man, suffering the ultimate penalty. Christ had added a caveat to his prayer, that ultimately, to let God's will be done. And after all his suffering, the Christian witness testifies to his resurrection and glory.

Thus, in these examples of Job and Christ, the Christian may not necessarily know the mechanics of the value of suffering and how it can be converted into great spiritual treasure, or how we are purged by it into holiness. But the Christian can have reason to believe that value exists because of these accounts, especially in regards to Christ. If Christ was God incarnate and accepted suffering in solidarity with man which lead to glorification, then should not the grieved Christian hope for the vanquishment of the darkness?

There is here, perhaps, an inspiring truth for the suffering Christian. Great is the faith of the one who remains faithful even in darkness. Consider the words of saints:


Blessed Angela of Foligno says that the prayer most acceptable to God is that which we force and constrain ourselves to say. Such is the prayer we turn to not for the pleasure found in it or because of our own inclination but purely to please God." (St. Francis de Sales, Introduction to the Devout Life)

As for my outer man, it too, since the spirit does not respond to it, is so besieged that it finds nothing to refresh it on the earth if it follow its human instinct. No comfort is left it save God, who works all this by love and very mercifully in satisfaction of His justice. To perceive this gives my outer man great peace and happiness, but happiness which neither lessens my pain nor weakens the siege. (St. Catherine of Genoa, Treatise on Purgatory, chap. 17)

Great power, says St. Francis, is there in a prayer made with pain. St. Catherine speaks of the siege she endures, and even though she is able to recognize the love of God in her suffering, the pains are no less weakened. These are two venerated saints whose words can inspire those in the midst of such suffering. Even if the pain remains, they can take consolation through it, that great is their prayer from the cross, as is their faith, following in the footsteps of Christ whom first showed the obedient way through suffering.

To maintain hold of the cross, following the Lord through the trial is to exhibit heroic Christianity. It is to be like a docile child, trusting of his parent as he is led through an unpleasant situation he cannot understand even with explanation, yet the parent knows it is for his benefit.

A parable comes to mind, the Parable of the Two Sons (discussed previously at TCV), when reflecting on this image of the heroic Christian who faithful through feelings of darkness.


28"What do you think? A man had two sons; and he went to the first and said, `Son, go and work in the vineyard today.' 29And he answered, `I will not'; but afterward he repented and went. 30And he went to the second and said the same; and he answered, `I go, sir,' but did not go. 31Which of the two did the will of his father?" They said, "The first." Jesus said to them, "Truly, I say to you, the tax collectors and the harlots go into the kingdom of God before you. 32For John came to you in the way of righteousness, and you did not believe him, but the tax collectors and the harlots believed him; and even when you saw it, you did not afterward repent and believe him. (Matthew 21: 28-32)

In this parable, the good son is the one who originally didn't want to do the father's will. Yet in spite of his instinct to resist, he overcomes his lethargy. He overcomes his obstinance. He conquers his lack of desire. It is this son who resembles the heroic Christian. The heroic Christian does not depend on constant feelings of a burning heart to respond to God. The heroic Christian understands that this earthly pilgrimage is not the final order, and that when he "asks" he can expect to receive, if not in this life, then multifold in the eternal life. He knows this because the master he trusts first showed the way, even if the pain persists as he follows.
Posted by The Catholic Voyager at 9:50 PM

Email ThisBlogThis!Share to TwitterShare to FacebookShare to Pinterest
Labels: Suffering