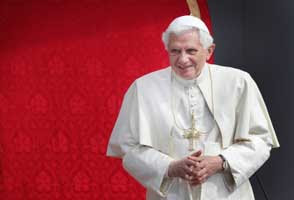 Today marks a historic time in the history of the Church and the world. A Pope has announced his upcoming resignation, the first time since 1415. Pope Benedict XVI cited health reasons for his stepping down. In light of this, I thought I would share some of the great quotes from him as Pope or during his years prior. In no particular order (and certainly not an exhaustive list!):


1.  [T]he Roman Missal promulgated by St. Pius V and reissued by Bl. John XXIII is to be considered as an extraordinary expression of that same 'Lex orandi,' and must be given due honour for its venerable and ancient usage. (Apostolic Letter "Summorum Pontificum" issued Motu Proprio, July 7, 2007)

This quote is a summary of Pope Benedict's encouragement of the Latin liturgy. As Catholics, we believe in a solidarity and unification with Christian heritage, not amputated from our predecessors, but united to them. The very language and form of the Latin liturgy brings a special unity with that tradition, as well as a piety and alert to divine grandeur in such signs as the priest, together with the people, facing and worshipping God. The recent language translation of the vernacular liturgy seems an echo of that reality when the priest says, "Pray, brethren (brothers and sisters), that my sacrifice and yours may be acceptable to God..."

Many believe the Moto Proprio contributed to the lifting of excommunications of several members of the St. Pius X Society, hopefully bringing them into union with the Church.


2. It is important to recognize dissent for what it is, and not to mistake it for a mature contribution to a balanced and wide-ranging debate. It is the truth revealed through Scripture and Tradition and articulated by the Church’s Magisterium that sets us free. (Pope Benedict XVI, Address to Bishops of England and Wales, February 1, 2010)

This quote catches my attention for a number of reasons. In our modern society, all too often does commercial media and the like attempt to cite someone who claims to be Catholic, as a legitimate voice for the Church, particularly when it comes to matters of truth in faith or morals. There exists an ignorance in the media and those who accept their suggestions. They proceed ignorantly that the Magisterium has an apostolic teaching pedigree linking it to Christ that does not exist among dissidents, or at the very least, they do not make the effort to let the reader know this is what the Church teaches. The secularist could get a vague grasp on this if they compare it to if the media continually paraded scientists who denied any form of evolution as representative of science in general. The media sometimes seems to characterize the Magisterium as versus the people, while ignoring the faithful Catholics who recognize Church teaching. It is of great value that the visible leader of the Church articulated this matter.

Another side-reason I like this quote is because the Pope here points out the source of truth revealed through the twin channels of Scripture and Tradition. The Magisterium only serves to communicate those truths under the guidance of the Spirit. Sometimes, well-meaning Catholics refer to a "3-legged stool" with regard to Church teaching which includes Scripture, Tradition, and the Magisterium. The 3-legged stool refers to the idea that if any leg of the stool is removed, the stool collapses. I tend to shy away from that analogy because it requires care to communicate that the Magisterium is not like the other two, and the analogy may be confusing for that reason. The Magisterium is not a source. It is the recipient. The Pope summarizes this tidily in the above quote.


3. The transforming 'moment' of [Purgatory] cannot be quantified by the measurements of earthly time. It is, indeed, not eternal but a transition, and yet trying to qualify it as of 'short' or 'long' duration on the basis of temporal measurements derived from physics would be naive and unproductive. The 'temporal measure' of this encounter lies in the unsoundable depths of existence, in a passing-over where we are burned ere we are transformed. To measure such Existenzzeit, such an 'existential time,' in terms of the time of this world would be to ignore the specificity of the human spirit in its simultaneous relationship with, and differentation from, the world. ... [Purgatory] is the inwardly necessary process of transformation in which a person becomes capable of Christ, capable of God and thus capable of unity with the whole communion of saints. ... Encounter with the Lord is this transformation. (Cardinal Ratzinger, Eschatology, p. 230-231, 1988)

I may cite this in forums more than any other quote. First, the entire context of the section on Purgatory has profound Scriptural exegesis, with an emphasis on 1 Corinthians 3:10-15. Much of that discussion can be read in the prior post What is Purgatory? I appreciate his emphasis in not trying to obtusely assign some quantum measurement to a reality that is first and foremost theological. Many times have I seen forum-dwellers ask how "long" purgatory lasts, and this quote is always helpful. Additionally, the Pope here focuses on the entire purpose of purification, of purgation, in a single phrase to make a person "capable of Christ." The emphasis is on the holiness of Christ, union with whom no blemish is compatible. He then unites the entire figure of burning from 1 Corinthians to "encounter with the Lord," drawing out theology from the imagery, as if a precious, gold statue were immolated and purged of all the mire clinging to it because of the very radiance of Christ in its presence, transforming it into himself, the unblemished lamb. This exegesis and theology is Ratzinger/Benedict at his best. I can even remember speaking on a forum with an Anglican, whom embraced the idea of purgatory as Ratzinger articulated it similarly in his encyclical Spe Salvi.


4. [T]his Apostolic Constitution provides the general normative structure for regulating the institution and life of Personal Ordinariates for those Anglican faithful who desire to enter into the full communion of the Catholic Church in a corporate manner. (Pope Benedict XVI, Anglicanorum Coetibus, November 1, 2009)

Some 400,000+ Anglicans converted to the Catholic Church thanks to the Pope's above Apostolic Constitution which facilitated the matter. As with the encouragement of the Latin liturgy attracting many traditional Catholics, the Pope reached out to Anglicans whom believed their church had derailed from truth.


5. Again and again it astonishes us that God makes himself a child so that we may love him, so that we may dare to love him, and as a child trustingly lets himself be taken into our arms. It is as if God were saying: I know that my glory frightens you, and that you are trying to assert yourself in the face of my grandeur. So now I am coming to you as a child, so that you can accept me and love me. (Pope Benedict XVI, Christmas Eve Homily, 2012)

This is one of those quotes that bears a certain brilliance in its simplicity, and focuses on a topic native to all of Pope Benedict's works, that is, love. The Pope here points out a sometimes forgotten attribute of God, which he draws from the revelation of the Incarnation itself. God wills to condescend himself beneath man, even though He is ultimately man's master. He willed to subject Himself to man on man's behalf, a people He does not "need," but has created them and suffered for them, that they might ever spend eternity in a never-ending banquet of joy with Him, all for love.


6. Love—caritas—will always prove necessary, even in the most just society. There is no ordering of the State so just that it can eliminate the need for a service of love. Whoever wants to eliminate love is preparing to eliminate man as such. There will always be suffering which cries out for consolation and help. There will always be loneliness. There will always be situations of material need where help in the form of concrete love of neighbour is indispensable. The State which would provide everything, absorbing everything into itself, would ultimately become a mere bureaucracy incapable of guaranteeing the very thing which the suffering person—every person—needs: namely, loving personal concern. We do not need a State which regulates and controls everything, but a State which, in accordance with the principle of subsidiarity, generously acknowledges and supports initiatives arising from the different social forces and combines spontaneity with closeness to those in need. The Church is one of those living forces: she is alive with the love enkindled by the Spirit of Christ. This love does not simply offer people material help, but refreshment and care for their souls, something which often is even more necessary than material support. In the end, the claim that just social structures would make works of charity superfluous masks a materialist conception of man: the mistaken notion that man can live “by bread alone” (Mt 4:4; cf. Dt 8:3)—a conviction that demeans man and ultimately disregards all that is specifically human. (Pope Benedict XVI, Deus Caritatis Est, 28b, 2005)

Speaking of love, here the Pope clarifies the idea that mankind only needs material things when we minister to them. Mother Teresa was a great example of doing both, giving physical care and yet recognizing the need to care for the soul. We also see in the Pope's quote a timely caution with regard to the power of the State, especially in light of the current government attempting to impose certain of its own dogmatic beliefs onto religious entities.


7. The church will become small and will have to start afresh more or less from the beginning. ... As the number of her adherents diminishes...she will lose many of her social privileges. ... But when the trial of this sifting is past, a great power will flow from a more spiritualized and simplified Church. Men in a totally planned world will find themselves unspeakably lonely. If they have completely lost sight of God, they will feel the whole horror of their poverty. Then they will discover the little flock of believers as something wholly new. They will discover it as a hope that is meant for them, an answer for which they have always been searching in secret. (Fr. Joseph Ratzinger, Faith and Future, 1969)

This quote sounds, to the Christian's ears, discouraging at first, that the Church may shrink in size. Yet, over forty years ago, Ratzinger foresaw society's continuing disregard for the Church, up to and including misrepresentation of the papacy (See for example TCV articles on false pope history at Huffpost and misquoted in UK Telegraph). This has certainly come to pass in many regards in many cultural circles. However, he also sees in that trajectory a purer church, stocked with a renewed spiritual zeal in its simplicity. In a sense, it ties into his purgatory quote, that through a process of purging, a purer product emerges from the other side.
Posted by The Catholic Voyager at 5:44 PM