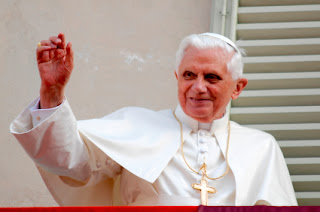 Earlier this month, TCV shared 7 great quotes from Pope Benedict XVI. Now that Benedict is Pope-Emeritus Benedict XVI, I thought I'd share a few excellent quotes about the Pope's legacy and character. There is no commentary this time, just some bold added by me that stood out. These are in no particular order.

Posted by The Catholic Voyager at 5:05 PM