A brief theology of gravity 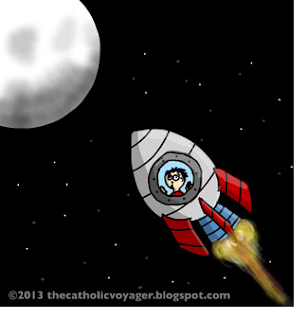 I've been reading Joseph Ratzinger/Pope Benedict XVI's book Jesus of Nazareth: From the Baptism in the Jordan to the Transfiguration. In it is an interesting analogy of gravity, a scientific law speaking to theological realities. While analyzing the statement in the Our Father prayer "thy will be done on earth as it is in heaven," he writes:


...Jesus himself is "heaven" in the deepest and truest sense of the word––he in whom and through whom God's will is wholly done. Looking at him, we realize that left to ourselves we can never be completely just: The gravitational pull of our own will constantly draws us away from God's will and turns us into mere "earth." ... what we are ultimately praying for in this third petition of the Our Father is that we come closer and closer to him, so that God's will can conquer the downward pull of our selfishness and make us capable of the lofty height to which we are called. (p. 150)

The idea of recognizing divine things within nature is called a theophany. In breaking down the etymology of theophany, we see theos "god"  and phainein "to show." Now, in certain Scriptural contexts, the term "the world" does not always refer to mountains and oceans and merely a created domain, but it can refer to the fallenness of creation, marred by the original sin (e.g. John 15:19; 17:14). Man lives in a damaged state and does not always love his neighbor as he ought. Lies, greed, lust, uncharity, and other sins abound, even sometimes from our own hearts.

Thus, the figure of a "gravitational pull" toward "mere 'earth'" is the Pope's way of analogizing the idea that we have a tendency to fall away from God. But the thing about gravity is that it is a conquerable force. Even a person can "jump" and defeat, so-to-speak, gravity for a moment. And with a powerful enough vessel, the gravitational force of the earth can be escaped. The Pope's analogy sees Christ as this vessel without which we are doomed to continue falling back into the murk of this world. He writes "left to ourselves we can never be completely just" but that Christ is the one "through whom God's will is wholly done." Attachment to Christ is the means to escape the gravitational pull toward a world grasping to draw us back to a life of uncharity, of "un-love."

Although the Pope does not delve into the following, I recalled another related analogy in a prior master's theology class. The moon is the figure of the Church.


CCC#748 The Church has no other light than Christ's; according to a favorite image of the Church Fathers, the Church is like the moon, all its light reflected from the sun.

You see in the above Catechism sentence, the reason the moon is able to reflect light is because it first receives and redirects that light from the sun. The moon is not the source of light, but is that which receives it. In the same way, we, the Church, are not the source of divine light, but we receive it from Christ, who is in this analogy the sun.

Continuing with these theophanies and this thought experiment, consider what effect the earth and moon have on each other. The gravitational pull of the earth has paralyzed the moon, so to speak, such that its rotation has conformed to the earth's, and the same side of the moon always faces the earth. This is called tidal locking. However, even though the moon has the weaker gravitational force, it still has its effect on the earth, tugging at the oceans, causing the tides, which is called tidal bulging.

If we look at this phenomenon in light of the fallen world and Christ's Church, we can see sort of an inspirational figure. Even though the moon is subject to the earth (i.e. the Church faces forces from the "world"), the moon can change the very shape of the earth with its own power (i.e. the Church, when operating by its strength, transforms the "world").

We can contribute to this "gravitational" phenomenon in the spiritual sense when we contribute to the power of the Church by loving neighbor, defending the truth, giving due care to the needy, selflessly giving of oneself to one's spouse, and so forth. These are the things in accord with the will of God. These are the kinds of virtues Christ accomplished "wholly" as Pope Benedict writes. In doing this, we are accepting the hand of Christ, his empowering graces and the "sunlight" he sends, and we can escape the sinful gravitational tendencies of this world––tendencies we could not escape without Christ––and ascend to "lofty heights."
Posted by The Catholic Voyager at 2:21 PM