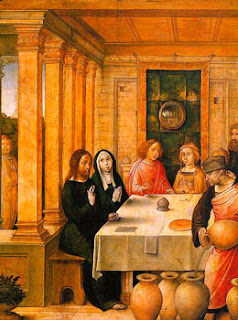 The Marriage Feast at Cana by Juan de Flandes, 1500 (acquired from Wikimedia Commons)

There are many resources demonstrating the various harms that pre-marital sexual activity often induces. This post is intended to collect a few. It is not intended to be an exhaustive list.

1. CAUSES MORAL HARM
All other harms of extra-marital sex should be supplementary to the moral harm done. The moral detriment to the individual can never be altered by any future technology or medicine. To recognize the moral quality of the sexual act, one not even need to be overtly religious, although, certainly Jesus Christ spoke to the proper order of marriage between the "male and female" and as it was "in the beginning" (i.e. Adam and Eve). (Matt. 19:4,8)1

But as was discussed in a prior post, What did the Church teach about marriage, men and women in 1880?, the very nature of the human body supports the idea that one man and woman belong together in the sexual order. One example is that a female egg naturally closes itself to receiving sperm from more than one father.

This is further fortified when we recognize the body's release of certain chemicals, which will be further addressed below, that tend toward attachment or even "addiction" to the recipient of a person's sexual attention. In other words, the body itself wants to move toward monogamous permanence when engaged in sexual activity.

These kinds of things are what belong to the natural law. For example, if someone came up to you and punched you for no reason, you would would rightly cry foul, that it was a violation of some kind to be struck unjustly. If you were at a restaurant and laid your wallet on the table for a moment and someone snatched it, you would rightly cry foul, as they took something that belonged to you. These examples speak to the sensibilities we have that human beings possess certain dignity and that it is morally wrong to violate that dignity.

In the same way, the various signposts of sexual activity toward committed, one-man, one-woman relationships communicate proper use of our human gifts, including our sexual faculties. Outside that committed relationship, persons engaged in sexual activity violate their own humanity and that of anyone else involved in the activity, whether or not they "feel" violated at that moment.

As I said, one needn't even be "religious" to draw such conclusions. But, certainly, if Jesus Christ is truly God, rose from the dead as witnesses attest, and taught his disciples about eternity for those living in accord with his teaching and damnation for those opposed, then the issue of proper sexuality is paramount.

2. COMPROMISES JUDGMENT
As stated above and in a prior post, during sexual activity, various chemicals are released by the body, such as oxytocin, vasopressin, and endorphins, which cause attachment to the recipient of sexual attention.

In a similar way, when these chemicals are released in the body outside of a committed relationship, the involved persons will tend toward that other person due to the physical bond they have exchanged. However, when those individuals move toward a decision for or against marriage with their partner, they may well make a decision induced more by chemicals rather than an objective analysis of their compatibility. This is not to say no couple that engaged in pre-marital sex could have a lasting, monogamous, or happy marriage. The point is rather to say how that potential is compromised by pre-marital sex.

The data supporting this is plenty. For example:

[M]arriages formed after cohabitation are rated as less stable and result in more divorces than marriages not preceded by living together. Cohabitation thus "does not seem to serve very well the function of a trial marriage... (Popenoe, 1993)."3

Study results also indicate that out of divorced women, 81.8% had engaged in pre-marital sex as opposed to 17.8% who remained abstinent and did not cohabitate.5 Studies also indicate that once the number of sexual partners a person has exceeds one, so does the risk for marital failure.6 Divorces can be a detriment not only to the couple, but to any children who may suffer the consequences of the dissolution.

You can see the pattern here that the virgin bride and groom have the statistically and significantly superior advantage for a successful marriage. Reason alone communicates that this is so because the virgin bride and groom have not developed those physical attachments to another person that could otherwise cloud their appraisal of a lasting mate. To boot, there are numerous testimonials and studies indicating that sexual activity is more fulfilling when exercised in marriage alone.

3. PREVENTS DISEASE
It does not take a great intellectual leap to realize that sexually transmitted diseases (or infections; i.e. STIs) are significantly reduced in persons who are abstinent. They are likewise reduced in a permanently monogamous relationship, i.e. marriage. As the Mayo Clinic puts it, "The more people you have sexual contact with, the greater your overall exposure risks."

Secular culture responds to this with the promotion of various contraceptives. However, this "solution" does not only not always solve the STI problem, but can perpetuate and even foster the other chemical and moral problems described. Contraceptives also instill a mentality toward the sexual partner that tend to objectify that person. A man who is closed to conception with a woman and contracepts with her will view her differently than if he had to consider her as a mother and a partner with whom to raise a child. One tends toward objectification, the other considers her more completely. (For resources on contraceptive information and on child regulation in accord with Catholic teaching, see some of the resources below.)

4. HARMS SOCIETY
In reviewing all of the above detriments of pre-marital sexual activity, we can see how this would harm society at large. Working our way back up the list, if extra-marital sexual activity contributes to the spread of STIs, persons facilitating or engaging in that behavior are contributing to that spread. And a variety of STIs are currently on the rise despite all the medical remedies and solutions which foster promiscuity.

As well, if greater pre-marital sexual activity clouds one's judgment toward identifying a marriage partner, then those persons have in some way contributed to the normalization of that behavior, and hence, the resulting marriage failures and STIs.

And finally, the moral decay resulting in the spread of pre-marital sexual behavior, supported by the emotional and physical data, literally de-humanizes us. That is one reason why proponents of abstinence before marriage invite everyone to embrace the beauty of reserving the sexual faculties for the marriage bed. The more individuals who embrace sexuality exclusive to marriage grows the pool of available mates with that disposition, and in turn, will result in more solid marriages. Such a movement could also help current practitioners of abstinence, who have the call and self-giving disposition to serve a spouse, in finding a suitable mate they may otherwise have difficulty finding.

CLOSING
Those who may not have practiced abstinence outside of marriage should not be discouraged by the data. It's never too late to practice a moral virtue. Such persons could be considered particular kinds of heroes of society, along side those who already practice abstinence, by embracing a virtue against what the pressures of a sexually addicted society might impose. See also the previous post, On Reconciliation: Can virginity be restored?

Even if such a person has already married, it is never to late to encourage others to practice proper use of the sexual faculties, teaching their children or others. Plus, simply learning about humanity can help married couples "see" each other for the unique beauty instilled in each other, and the unique value and societal pillar extant in the stable foundation of a family.

OTHER RESOURCES
Effects of Cohabitation Research Summary
Premarital sex and greater risk of divorce
What does the Church teach about Birth Control?
The Harms of Contraception
What a Woman Should Know about Contraceptives


1Some writers and commentators like to talk about a confusing message in the Bible, going so far as to say the Bible endorses polygamy or divorce. Yet there is are no such passages making such moral definitions. Typically, those who claim the Bible supports polygamy will point to examples of characters in Scripture practicing it and interpret that as a moral endorsement, which does not automatically follow. This is especially so when one realizes that the events and figures of the Old Testament are often an inferior form to that which is to come in the New Testament. This is basic Christian typology. Something in the OT reflecting the natural law, like thou shall not kill, remains in the moral order. The behavior of any individual may or may not be proper.
2(Heaton, Tim B., Factors Contributing to Increasing Marital Stability in the United States, Brigham Young University, 2002)
3 (Smith, Tom W. American Sexual Behavior: Trends, Socio-Demographic Differences, and Risk Behavior. National Opinion Research Center University of Chicago. March 2006)
4(Forste, Renata and Tanfer, Koray. Sexual Exclusivity Among Dating, Cohabiting, and Married Women. Journal of Marriage and Family, Vol. 58, No. 1. (Feb. 1996) p. 43, 46)
5Teachman, Jay. Premarital Sex, Premarital Cohabitation, And the Risk of Subsequent Marital Dissolution Among Women. Journal of Marriage and Family 65 (May 2003): 444–455
6The National Survey of Family Growth. 1995. Cited at The Wintery Knight.
Posted by The Catholic Voyager at 6:42 PM