7 historic photos with Catholic back stories

The Church's influence dwells in more places than may meet the eye. Following are seven historic photos, in no particular order, whose back stories contain interesting Catholic aspects. 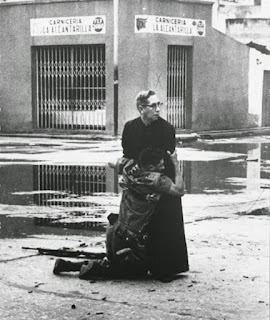 This dramatic photo depicts Navy chaplain Luis Padillo holding up a wounded soldier during a brief Venezuelan rebellion known as El Porteñazo. Other images from the scene (see article at Rare Historical Photos) show Fr. Padillo giving last rites to the dying on the streets. The article takes note of the kinetic danger while the priest held the soldier "as bullets chewed up the concrete around them." The photo was taken by Hector Rondón Lovera on June 4, 1962. It "won the World Press Photo of the Year and the 1963 Pulitzer Prize for Photography. The original title of work is 'Aid From The Padre'." The article also points to the frightening irony in the background:


Even more intense about this picture is the setting, in the background is a carnicería (a butcher’s shop). In Spanish a carnicería means both a “butcher’s shop” and “slaughter, carnage”. The phrase “fue una carnicería” (English equivalent: “it was carnage”) is so common in the Spanish language. The parallel really catches one’s eye and draws the horror of the scene even further. This photo is considered by many to be the final photo of the Titanic still afloat. The photo was taken April 12, 1912 three days prior to the ship's infamous capsize. The Catholic interest in this photo is in its photographer, Francis Browne, a future Irish Jesuit priest who would be ordained in 1915.

The Encyclopedia Titanica recounts Browne's bio. He had begun his theological studies in 1911. In 1912, his uncle gifted him a ticket on the Titanic. His ticket was for travel from Southampton to a stop at Cherbourg to the following day's port at Queensland (now known as Cobh). Multiple accounts (e.g. Rare Historical Photos, Time Magazine) say a wealthy family had offered Browne a ticket to stay for the remainder of the Titanic's voyage. Browne sent a request to his superior cleric for permission to accept the ticket. According to Fr. Eddie O'Donnell, a Jesuit priest who collected Browne's photos many years later, Browne received a terse telegram from his Dublin superior which said: "Get off that ship." Browne disembarked and snapped the above photograph of the Titanic as it left Queenstown never to arrive at its destiny in New York. Many of Browne's photos from aboard the Titanic were also used as references for the 1997 film Titanic, as they are among precious few photos taken by a passenger who disembarked mid-voyage.

One final point of intrigue: according to the book Titanic by Messenger Publications, the wreckage of the Titanic revealed that the ship "split directly through state rooms numbered 36A and 37A, Frank Browne's quarters, and those of Thomas Andrews," the managing director of Harland and Wolff, Belfast, builders of the Titanic. 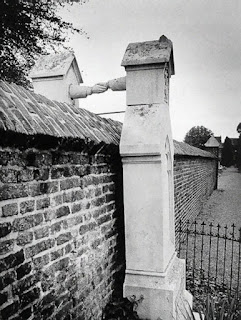 In the Dutch town of Roermond are these two tombstones, joined over a brick wall by two holding "hands." On one side of the wall is a Protestant cemetery and on the other, a Catholic one. The tradition called for an individual to be buried with the peers of his/her faith. The Telegraph summarizes the back story:


One one side of the wall lies JWC van Gorkum, a 19th century Catholic woman of nobility, on the other her husband, a Protestant. When he died, he was buried in the lot reserved for Protestants. Eight years later she passed away too, leaving directions for this monument - with the pair holding hands over the wall that divides the Catholic and Protestant cemeteries - to be built.

In a functional solution, the clever Catholic wife managed to respect the traditions of the cemeteries and be buried in a special, and most unique, proximity to her husband. 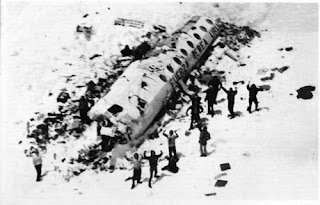 It is known as one of the most incredible survival stories in history. In 1972, a flight over the Andes Mountains in South America transported 45 people, including a rugby team. The plane crashed, killing many of them immediately. In the subsequent days, the remaining survivors battled for life in the frozen ice of the mountains. Desperate and having run out of food, the stranded had no choice but to eat the bodies of their fallen comrades. By the time the above rescue photo was taken, 72 days had passed, and 16 remained alive. The story razes at the concept of suffering and fate. Survivors told of horrors and discouragement and confusion. But at least one thing kept them united––the rosary.

Recently, an article about the survival story cited the author of a book about the incident:


As all of the team members were from a Catholic tradition, they employed ritual to keep their spirits up in the face of worsening conditions. Nightly discussions and debate followed by rosary recited in unison in the fuselage of the plane helped maintain a unity of purpose...


We had an enormous desire to live and faith in God. Our group was always united. We prayed the rosary. We kept our faith. I’ve changed. That’s the best thing about it.

While being treated after the rescue, a priest, Father Andres Rojas, visited the young men to comfort them, and even assured them that in such a desperate situation they had not sinned by eating the flesh of their deceased friends. The 1993 film Alive documents the incident, and includes scenes of the survivors praying the rosary. 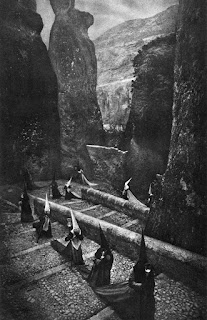 Anyone not familiar with the traditions behind this photo might think a caravan of mountain wizards are on their way to the ball. Or maybe it looks like a Klan rally.  Many old photo web pages file this under "creepy." But this is an example where context is crucial. This image depicts the celebration of Holy Week (Semana Santa) in Spain in 1940. The persons in the photo are walking as a sign of penance for their sins. An article at the University of South Carolina explains the significance of their outfits:


The “Nazarenos” or “Penitentes” may initially catch Americans off gaurd, as their costumes resemble those worn by the Ku Klux Klan. These costumes actually have no sinister meaning. The Spanish reasoning for wearing these costumes is completely different than that of the KKK. The cone-shaped “capirote” symbolizes a rising toward the heavens. The Penitentes are seeking forgiveness for their sins, and the shape of the capirotes signify their penance and yearning to be closer to the heavens. They hide their identities as they mourn the pain and suffering of Jesus Christ on the cross. On Easter Sunday, each person removes his capirote in jubilation of Jesus's resurrection from the dead. Nazarenos are traditionally all male, but in recent years, many young girls and women have begun to wear the costumes. No one can decipher between males and females behind the disguise.

See the full article for other photos of the ceremony taking place in modern times under better lighting than the dim mountains depicted above!


For this photo, we turn back the clock all the way to January 21, 2015. It was the Australian Open, the first tournament in every calendar year that makes up pro-tennis' "Grand Slam." The second round featured a match between then-world #3 Rafael Nadal, winner of 14 Grand Slam tournaments, and Tim Smyczek, then-world #112, who had to win qualifying matches to even make the tournament. The match was grueling, lasting over 4 hours. Nadal led 6-5 in the final set only 2 points from victory when an unruly fan shouted during Nadal's serve which sailed long. The stadium booed as the umpire reiterated silence and Nadal stared in the direction of the ruckus. As Nadal prepared to serve again, Smyczek, in a nonobligatory act, told the chair umpire to allow Nadal to re-do the serve. Nadal gestured in gratitude to Smyczek as the crowd cheered the generous act of kindness. Nadal would soon win the match, but Smyczek's gesture remains a special historic moment of victory. In the above photo, Smyczek (left) and Nadal share a respectful handshake after the match.

Smyzcek, a Wisconsin native, is a practicing Catholic. Recently, the National Catholic Register interviewed him about this incident and his faith life. We learn of Smyczek's regular mass and confession attendance, praying the rosary, and his upcoming marriage in November. He says:


I carry around little books like The Way and The Forge from St. Josemaría Escrivá. They are very handy while traveling, because they don’t take up much space at all. What they lack in size, they more than make up for in wisdom from St. Josemaría, who wanted people to treasure, share and live out their religious beliefs rather than hide them.

Smyczek's now-famous gesture exemplifies the fruits of his religion in action. The catechism lists among the twelve fruits of the Spirit "kindness" and "generosity" (CCC#1832).

Nadal's words in the postgame interview were fitting:


First of all, I want to congratulate Tim, because he's a real gentleman. What he did in the last game is–– not a lot of people will do something like this at 6-5 in the 5th...after four hours. So just congratulate him for that, because he played, I think, a great match. 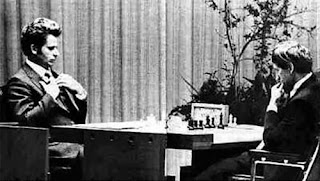 In our final historic photo, we return to 1972, showing the World Chess Championship between Soviet Boris Spassky (left), the defending champion, and American Bobby Fischer. Fischer would win the match to become the first American-born champion, ending a 24 year streak by Soviet players.

As references collected in the Wikipedia article recount, Fischer found himself about to enter the championship without a "second" (a sort of chess counselor between matches). He counted on his childhood friend, William Lombardy, who was also a chess Grandmaster. In 1958, when Fischer was 15, Lombardy had coached him to be the youngest Grandmaster in history. But before 1972 rolled around, Lombardy was ordained a priest in 1967. He acquired permission to go to Iceland and serve as Fischer's second for the 1972 World Chess Championship.

According to the 2011 book Endgame by Frank Brady:


Fischer lodged a formal protest [over the second-game-forfeit] less than six hours after the forfeiture. It was overruled by the match committee... Everyone knew that Fischer wouldn't accept it lightly. And he didn't. His instant reaction was to make a reservation to fly home immediately. He was dissuaded by Lombardy, but it seemed likely that he'd refuse to continue the match unless the forfeit was removed.

Fischer eventually stayed. An article from August 19, 1972 in the Lawrence-Journal World, which ran during the multi-day championship, described Fr. Lombardy's priestly presence at the event:


The Rev. William Lombardy, the Roman Catholic priest and international grandmaster from the Bronx who serves as Fischer's second, viewed the end-game maneuver with bibical (sic) awe. "He passeth the piece that passeth all understanding," the priest punned gravely. Father Lombardy's constant cool and rollicking good humor seem to have a soothing effect on the moody Brooklyn genius [Fischer]… After move 12 in Tuesday's 14th game, which also happened to be the Feast of the Assumption, Father Lombardy left the arena long enough to celebrate mass at St. Joseph's Hospital.

Several days later, Fischer won the championship, thanks, in part, to his fellow Grandmaster, his second, who also happened to be a Catholic priest.
Posted by The Catholic Voyager at 10:30 PM