In November 1963, the Catholic Committee on Scouting of North Bergen, Boy Scouts of America visited St. Joseph's Village, a home to nearly 200 dependent children in Rockleigh, New Jersey. The complex operated from 1958-1972 and was run by the Sisters of St. Joseph to give care to children without a viable home situation.


There were two times the scouts had a clam bake there, as I remember. And I was at it one of the times. That day, they had different activities that the scouts were doing, like rope climbing and things like that. And the nuns were participating in them.

Pictured above are two of the sisters enjoying a ride on the Village's playground swing set, near the Barbara Givernaud Cottage, a residence home for the children.

Today, the Village is now a facility for a variety of human services, as summarized at the St. Joseph's Village website:


After the Village closed it doors for good in 1972, the Sisters of St. Joseph of Newark sold the property to the Bergen County Special Services on the condition that it be used to help people. After making considerable modifications, the county opened several human services programs — a 110 bed nursing home, a substance abuse rehabilitation program, a high school for autistic children, and other programs for youth with emotional and behavioral needs.

On August 5, 2010, over 2,000 feet beneath the earth's surface, the San José copper-gold mine in Copiapó, Chile suffered a cave-in. Over 700,000 tons of rock sealed the exit on 33 miners. The following days would prove taxing on the hearts of the watching world.

Mining companies throughout the globe offered their assistance. The owner of one company, Drillers Supply International, was Greg Hall, a Catholic deacon at Christ the Redeemer church in, Cypress, Texas.

In a recent interview with Aleteia, Deacon Hall recalls:


The miners were somewhere between 400 and 800 meters down. The mining equipment only goes to 400 meters. We were called in to help them get to 800. ... After day 10 I was convinced it was a recovery effort, not a rescue. There was a place in the mine called the “refuge” where trapped workers could go during an emergency, but there were only provisions there for three days.

Yet, on day 17, a drill penetrated the "refuge" chamber, and the rescue crew could hear tapping on the end of the drill. When they raised the drill, on the end was a note in Spanish reading: "We are OK in the refuge, the 33."

How did 33 men survive 17 days on 3 days rations? They ate two teaspoons of tuna, one biscuit, and a sip of milk every other day. They also had dug for water and rationed extra water from the radiators.

Now with an opening to the miners, supplies were sent for their continued survival. Yet the Chilean government's plan for rescue at this point was scheduled to last 5-6 months. Hall met with officials and convinced them to attempt what became known as Plan B.

With help from a team of specialists and high-tech equipment from around the world, the rescue team sought to widen a hole which was originally 5 inches in diameter to a hole 26 inches in diameter. Throughout the ordeal, Hall prayed and prayed. While praying the Liturgy of the Hours one morning, he recalls praying: "I’m going to do everything I can, Lord, but this is not my work, this is your work."

One hundred feet from finishing the widened tunnel, the drill stopped. "We were stuck, totally, 100 percent stuck," Hall recalls. The equipment had already defied computer modeling for that depth and that pressure to that point. The situation felt bleak. Hall prayed again, "I’ve done everything I can, Lord, this is your work.  You are going to have to send your angels." And the drill finally came to life again, finishing the 26-inch wide tunnel through which the miners would be rescued one by one via a narrow capsule. "God drilled the hole," Hall says.

Pictured above is Mario Gomez, the ninth miner rescued, pausing to pray after reaching the surface. The narrow transport capsule is in the background. The 33rd and final miner was rescued on October 13, 2010, over two months after the cave-in, and also the feast of the last apparition of Our Lady of Fatima.

The incident is now a major motion picture called The 33.

In 1900, Chinese Christians sustained some of the worst persecution in Chinese history during "The Boxer Rebellion."

According to History.com, a number of Chinese rebelled against Christian residents and missionaries, and other Western immigrants, blaming "their poor standard of living on foreigners who were colonizing their country." Whether immigration attributed to their poverty was a matter of debate. For instance, a large percentage of Boxers came "from Shandong province, which had been struck by natural disasters such as famine and flooding."

During the rebellion, "the Boxers killed Chinese Christians and Christian missionaries and destroyed churches and railroad stations and other property." Pictured above, center, is a Roman Catholic priest identified as "Pater Schen," with two Catholic guards, preparing for a siege on their church by the rebels. In researching the back story of this photo, I was not able to ascertain the fate of these specific men. However, the Catholic Encyclopedia records a number of martyrs during the Boxer Rebellion, including the Lazarist priest, Jules Garrigues, Doré, two Marist brethren, and Father d'Addosio. 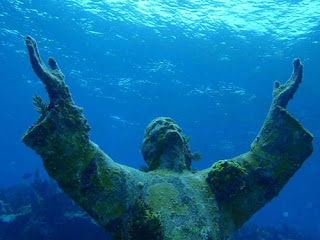 For our next photo, we go subaqua to the waters of Key Largo, Florida. Pictured above is a 2009 photo of one of the premier attractions of Key Largo––the Christ of the Abyss statue. It was installed in the underwater John Pennekamp Coral Reef State Park in 1965.

The statue is the third underwater sculpture of its kind, cast from the same mold as the original, which dates back to 1954 near Genoa, Italy. The second, installed in 1961, is off the coast of Grenada.

The Key Largo statue celebrated its 50th year this year. The man responsible for transporting the replica of the original Italian statue is Gabe Spataro. Earlier this year, at age 83, he celebrated the statue's anniversary by diving, while legally blind, no less, in Key Largo to lay wreaths on the statue.

Discovery News recently produced a short video on the Key Largo Christ of the Abyss. The video features the photographer credited above, Stephen Weir. Although Weir himself is not a Christian, he said of the statue, "For me, when I first saw Jesus, it was inspirational." Watch the Discovery News video here.

If you think this photo looks like characters from Dragnet taking detectives' notes with Catholic statues, you're not far off. This photo appeared on the front page of the June 9, 1961 issue of the Denver Post with the headline: Religious Statues Prod Thief's Conscience. The brief story reads:


Denver detectives Walter Starr (left) and Arthur Moser make a list of the religious statues left, apparently by a thief, in vestibule of the parish house of Loyola Catholic Church, 2301 York St. The statues were in three suitcases, and the Rev. Ed P. Murphy left them undisturbed several days, thinking they belonged to a visiting priest. Finally he opened them, and in looking over the statues found the name of their owner, Hans Dorff, a San Francisco importer. Fr. Murphy wrote to Dorff, and Dorff notified Denver police. Seems the statues and other belongings were stolen from his car parked on a Denver street the night of May 29.

This gentleman is cooking up none other than smoke signals from inside the Vatican during the 1963 papal conclave at which Pope Paul VI was eventually elected. This was the first time special chemicals were added to the signal smoke. To outside onlookers, white smoke signifies a new pope has been chosen. Black smoke signifies no result. During the prior conclave in 1958, what was intended to be black smoke escaped white, confusing the audience into thinking a pope had been named, when in fact he had not.1 The confusion later led to the chemical additives of 1963. In 2005, ringing of bells were also added as part of the signal for an affirmative papal election.
1Burke-Young, Francis A. Passing the Keys. Madison Books. Maryland, Oxford. 2001. p.110


Either the two priests above were holding a pair of binoculars when they shrunk, or they are Jesuits at the Vatican Observatory. On February 2, 1946, the announcement was made of the "Timmers Comet," named for Brother Matthew Timmers above, with his associate Father Walter Miller.

The comet, visible with telescopic assistance, passed over the Americas. Subscribers of a Harvard "announcement" list received a mailing that included "Tables of position" for the comet's spring travels. Author J. Hugh Pruett for the Spokane Daily Chronicle recounted his observation:


Two of us first looked for Comet Timmers in a wonderfully clear and moonless sky on the evening of February 25. There...was in the position predicted, a fuzzy little object with a bright central nucleus and a faint indication of a nebulous tail pointing away from the sun––as do all orthodox cometary appendages. Surrounding it in the circular field of view were many little stars of various brilliancies. We were reaching into the great spaces for an interplanetary traveler far beyond the ken of unaided vision.

Posted by The Catholic Voyager at 8:00 PM