This blog post is a critique of a modern "TED talk" titled: "Science can answer moral questions." (Click these links to watch the video or read the transcript.)

TED is a well-known international nonprofit dedicated to providing a platform for "powerful talks" and promotion of the "power of ideas to change attitudes, lives and, ultimately, the world. ...from the world's most inspired thinkers."

The speaker of this particular TED talk in 2010 was Sam Harris, a doctor in neuroscience, also known for challenging traditional proofs for the existence of God.

MAKE NO ASSUMPTIONS
In order to identify the inherent flaw that lines his entire speech, I invite the reader to lay down all presuppositions on what he/she already believe about the morality of any issue. That is a distraction from the matter at hand. This blog post is solely intended to confront the assertion of the TED talk as to whether science can answer moral questions. Therefore, in this post, I will only examine Harris' assertions on morality based on that premise.

According to Harris, something like physical health, which can be measured by science in the form of facts, reveal that which is moral or not. Granted, he admits science cannot answer every moral dilemma, but this is nonetheless the gist of his speech. Feel free to click the links at top to hear his speech in context. Using his own terminology, his argument in visible form looks like this:


As a general principle for morality, the conclusions in this table aren't necessarily wrong. But remember our question. Is science what is providing the moral answers?  I ask the reader to follow carefully. Remember what I requested earlier. Lay down all presuppositions of what you consider moral. Let science do what Harris says it will do. Approach science with a blank slate in order to permit it to reveal to you what is moral. Can science tell us whether or not something is moral.

In Harris' argument, he actually makes an illogical leap that goes like this, for example: Science reveals that X causes death. Therefore, X is morally evil. But what's missing from his logic? I'll ask it in the form of a question: What makes death a moral evil? Science says nothing about the moral quality of any molecular reaction. Science only reveals what happens when these molecules interact with these molecules.

Think of it this way. Science reveals that an injection of 5g of sodium thiopental is effective in causing death in humans. Some states use this barbiturate to administer lethal injections to criminals. Therefore, if a man acquired this barbiturate, and injected it into a stranger on the street, the stranger would die. What does science reveal about the morality of this act? Absolutely nothing. All science "answered" was that X would result in Y.  All science "answered" was that these molecules have this reaction with these other molecules. But it takes an interpretation of the facts to discern which reactions have what moral quality.

SECRETLY APPEALING TO HUMAN DIGNITY
When Harris says he is appealing to science to answer a moral question, what he is actually doing is appealing to the inherent dignity of a human being versus, say, an inanimate object. In the above table, I marked where Harris is missing an intermediate logical step in the second column. It is in this step where one would establish a human being merits good health because of their inherent dignity. Harris skips this point in his analysis. It is a blind spot of sorts in his entire discourse. He presupposes human dignity. He acts as though science has revealed this dignity when it cannot.

At one point, Harris admits that his belief in moral answers aligns him with religious "demagogues," yet claims his answers come from "intelligent analysis" and theirs come from "a whirlwind." He says:


Now the irony, from my perspective, is that the only people who seem to generally agree with me and who think that there are right and wrong answers to moral questions are religious demagogues of one form or another. And of course they think they have right answers to moral questions because they got these answers from a voice in a whirlwind, not because they made an intelligent analysis of the causes and condition of human and animal well-being.

At least Harris admits here that his moral determinations come from "analysis" of the science and not from the science itself. In that sense, he has already debunked the title of his talk. But as I also mentioned, his analysis contains the presupposition of the dignity of the human person. Ironically, it is Harris who appeals to a "whirlwind." He avoids analysis of why humans have dignity at all or are even capable of moral actions. 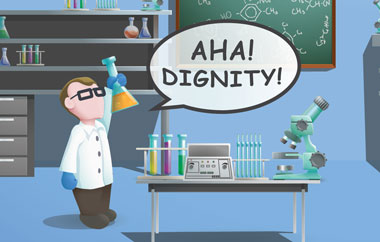 CONCLUSIONS
The Catholic would agree that it is immoral to harm another's physical well-being because "The dignity of the human person is rooted in his creation in the image and likeness of God" (CCC#1700) Smashing a rock does not have the same moral quality even though the act can likewise be measured scientifically. The "natural moral law" is reasoned based on the principle of what "properly belongs to human nature" (CCC#1955). (See related post on Natural Law here.) This dignity is of such value, God Himself assumed the human nature in the Incarnation. But I won't go on a long apologetic for the dignity of the human person from a Catholic perspective because the purpose of this post is to show science cannot answer moral questions.

Consideration of the dignity of the human person is indispensable in answering moral questions. And the dignity of the human person is not revealed by science. Dignity cannot be empirically observed in a laboratory. Thus, because human dignity is an essential component of moral inquiry, science cannot "answer" moral questions. It can only show what effects certain things will have in the empirical world, but not the moral quality of any effect.