Gosnell: The Trial of America's Biggest Serial Killer is one of the most important films in recent years. It is an engaging, well-paced crime drama that sheds overdue light on the nature of the abortion industry and the government and media powers that protect it.

ABORTION COVERUP
Perhaps the scariest moment in the Gosnell movie is when one realizes how protected the abortion industry is. During a scene depicting pretrial questioning, a state official shrugs at the fact that the state of Pennsylvania neglected to properly vet abortion businesses.

In the actual case, Pennsylvania health department official Janet Staloski testified that health department attorneys "changed their legal opinions and advice to suit the policy preferences of different governors" and that the state didn't want to be "putting a barrier up to women" seeking abortions.

The lack of media interest in the case likewise reveals the propagandist quality of the abortion industry. Whether from government or media, such propagandists have proven reluctant to even discuss abortion's true nature.

The actual Gosnell Grand Jury report filed in 2011 goes on for over 60 pages detailing how the Pennsylvania Department of Health woefully permitted unsafe medical conditions to persist at abortion offices. Gosnell's office, as the movie reiterated, went uninspected at one point for a span of 17 years.

That section of the report begins:


We discovered that Pennsylvania’s Department of Health has deliberately chosen not to enforce laws that should afford patients at abortion clinics the same safeguards and assurances of quality health care as patients of other medical service providers. Even nail salons in Pennsylvania are monitored more closely for client safety.

The film moves along at a decent pace, beginning with investigators discovering illegal prescription drug activity from Gosnell's office. The abortion horrors transpiring there might not otherwise ever have been exposed if not for the state following the drug leads.

It is a fascinating watch, especially for those interested in true crime, courtroom drama, and police investigation. Ed Morrissey, senior editor at Hot Air and regular guest host on Relevant Radio, reviews some of the other accurate attributes of Gosnell here.

Although the subject matter largely revolves around abortion, the movie is not graphic. Evening television depicts far more gruesome imagery than can be seen in Gosnell. That brings me to Baby Boy A.

BABY BOY A
Baby Boy A was born alive and subsequently murdered by Gosnell. "[T]he doctor just slit the neck," testified Kareem Cross, an assistant at Gosnell's office. A photo of the baby factored into Gosnell's guilt. Gruesome details of Baby Boy A's fate are given in the Grand Jury Report beginning on page 100. Cross was asked why she took the picture of this boy Gosnell killed. Cross testified:

Below is a screencap of Baby Boy A from the Grand Jury Report. 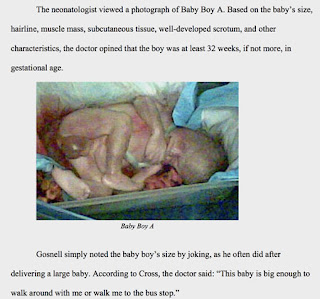 I asked film director and star Nick Searcy via Twitter why the photo was not shown in the movie. He graciously replied: "Because we have good taste and discernment."

While I respect that decision and the audiences Gosnell had to consider, I would like to have seen the photo in the film. Granted, the film's epilogue does refer the viewer to the Gosnell film website to see the photo.

The issue brings to mind the question of whether or not to show images of aborted babies. For example, images are shown by the Pro-Life Action League's "Face the Truth" tours. Pro-life theology professor Dr. Monica Miller argues photos expose the truth of abortion's atrocity in a way non-visual communication cannot. In 2013, not long after the Gosnell trial, she was interviewed on the Kresta in the Afternoon show on the topic Graphic Images: An Apologia (written form of her arguments can be also read at Pro-Life Action League).  In the case of Baby Boy A, I do not find the photo that graphic. It is a photo of a newborn. I would like to have seen the image in the movie, if even by way of a long camera shot. To include the photo in the film seems consistent with the unmasking theme of the film itself. The matter also reminds me of the graphic nature of The Passion of the Christ (2004). Although many criticized the brutality in that film, many others argued for the necessity of depicting the violence. And the Baby Boy A image is far more benign than what is depicted in The Passion.

GOSNELL EVEN WORSE THAN FILM REVEALS
Depicting all of Gosnell's crimes could probably fill multiple television seasons. The Gosnell film focuses largely on the investigation and parts of the trial, including Baby Boy A and the death of Karnamaya Mongar. However, his gruesome legacy went much further. As the film mentioned, Gosnell's atrocities go back at least to the early 1970s in which he participated in an experimental abortion technique that badly damaged many women's insides.

The Grand Jury Report goes on for hundreds of pages about his improprieties, including especially disturbing accounts beginning on page 6 under the subhead "Butcher of women."

For example, Gosnell tore the cervix and colon of one woman, prevented relatives from getting to her, and only let them in once they threatened to call police. The victim was brought to a hospital and had to have a portion of her intestine removed. Multiple other stories in the report tell of similar horror.

SUMMARY
All in all, this is a gripping film full of accurate details on one of the most important issues of our time. Not to be lost is awareness of the collaborative effort by government and media in facilitating Gosnell's crimes in the name of abortion. It is an eye-opening account to anyone unfamiliar with the abortion industry and the schemes that hide its true horrors.
Posted by The Catholic Voyager at 9:14 PM