Although this post is not directly theological, it is an exercise in logic and lateral thinking. Such cognition can be useful in life when answers are not obvious. It can also help in theological studies such as when interpreting Scripture in instances where figurative lessons await discovery beneath the literal meaning of a text. So let's look at the classic Monty Hall problem.

Here is how an article at Scientific American presents the Monty Hall problem and it's supposed solution:


[Y]ou are on a game show with three doors, behind one of which is a car and behind the other two are goats. You pick door #1. Monty, who knows what’s behind all three doors, reveals that behind door #2 is a goat. Before showing you what you won, Monty asks if you want to switch doors. ... [Y]ou should always switch. ... Here’s why: At the beginning of the game you have a 1/3rd chance of picking the car and a 2/3rds chance of picking a goat. Switching doors is bad only if you initially chose the car, which happens only 1/3rd of the time. Switching doors is good if you initially chose a goat, which happens 2/3rds of the time. Thus, the probability of winning by switching is 2/3rds, or double the odds of not switching. ... [T]ry the various computer simulations yourself and you will see that you double your actual wins by switching doors.


(1) Monty never opens the door you chose initially; (2) Monty always opens a door concealing a goat; (3) When the first two rules leave Monty with a choice of doors to open (which happens in those cases where your initial choice was correct) he makes his choice at random.

Let's take a look at this visually in 2 Figures: 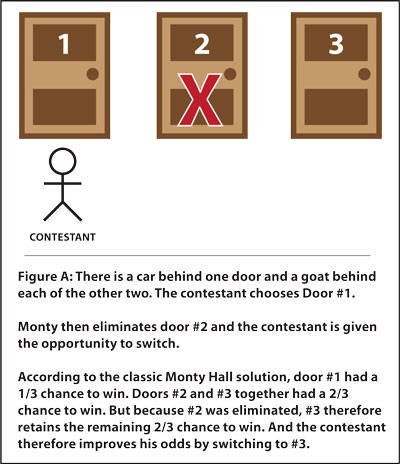 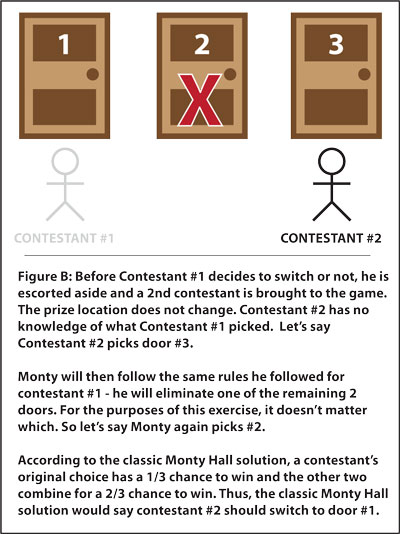 The classic Monty Hall solution recommends each contestant switch to the other's door to improve his odds of winning. But, as you can see from Figures A and B, there is a statistical conundrum.

In conclusion, I don't profess to be a statistics expert. And even if someone offers a sound mathematical explanation to account for what I've discussed above, I think the thought exercise will at least be fruitful in producing that answer — one which I have not previously seen to date.
Posted by The Catholic Voyager at 6:42 PM